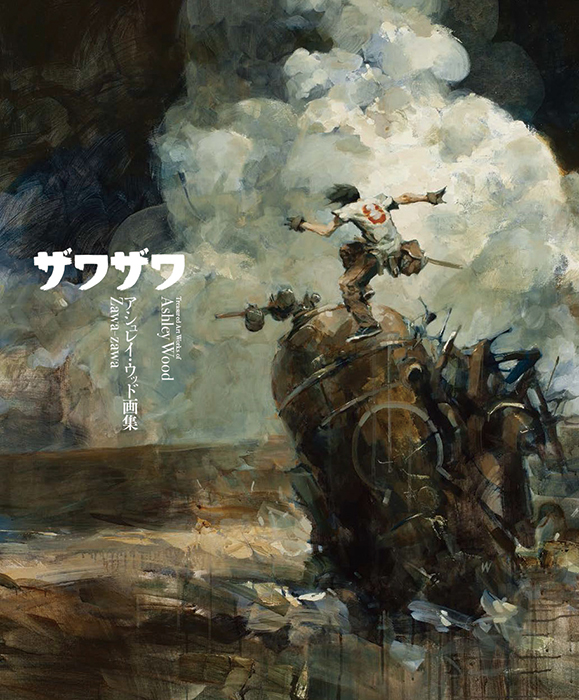 This comprehensive collection of the best of Ashley Wood’s work covers nearly 400 “treasured” art works in a range of media, from his oil paintings, sketches and drawings, to his package and figurine designs. These works have either been unpublished or have only been available in previous exhibition catalogues. Inspired by Osamu Tezuka (the legendary Japanese manga artist) and Nobuyoshi Araki (the Japanese photographer), Wood is in constant motion developing new epic stories and expanding universes populated with his designs and creations for toy lines, comics, videogames, film, and music. He continues to evolve and inspire many new artists. This is a must-have book for hardcore Ashley Wood fans around the world.

About Ashley Wood’s digital oil paintings:
First he draws a sketch with a thick black marker. Then he scans the sketch and draws it digitally. Then he prints it out on a large canvas and does the oil painting on top of the print-out. After scanning the oil painting, he adjusts the details digitally. He does this several times until he feels the art work is finished.
This combination of oil painting and digital drawing is the foundation of his iconic style and is respected from many artists around the world.

[Profile]
ASHLEY WOOD:
Born in 1971, Ashley Wood is an internationally acclaimed Australian painter, designer, art director, and comic book artist. He started his career working with Marvel, DC and Image Comics and then moved on working mainly with IDW Publishing. Works such as the digital comic “Metal Gear Solid 2: Bande Dessin&#233;e” and the game “Metal Gear Solid 2: Sons of Liberty” earned him popularity in the gaming industry. Wood co-founded a toy company called ThreeA based in Hong Kong that produced many world-famous figurines. Since 2008, he has designed hundreds of original toys, characters, robots, books, and apparel. He has created many iconic worlds, stories and characters, such as the Popbot series, the World War Robot series, Lore, Automatic Kafka, Zombies vs Robots, Spawn Book of the Dead and more.